Above is the nutrition facts for a large fries at McDonalds. As you can see the ratio of calories to grams of food is high, 510 calories in 154 grams of food. Close to half, 210 of those calories are coming from saturated fat. Also if you’re following a low carb or keto diet, one serving comes with 66 grams of carbs.

On the other hand there are such things as nutrient dense foods. Nutrient dense foods are plentiful sources of vitamins and minerals, among other nutrients. Some examples include kale, salmon, spinach and berries which are high in antioxidants. A lot of fruits are dense in nutrients, including the pear. Below are the nutrient facts for a standard medium pear. 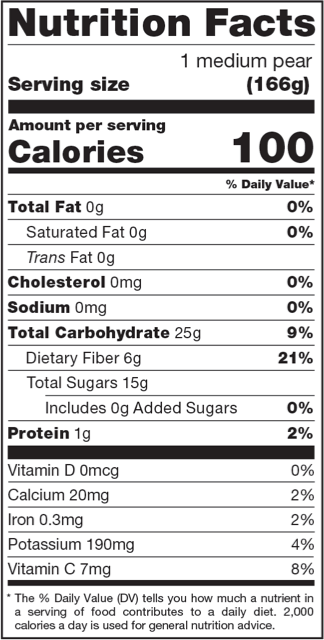 Notice the serving is 166 grams, comparable to the McDonald’s Large fries serving size that is 154 grams, less than the pear yet its higher in energy dense macronutrients like carbohydrates and saturated fats. The pear has zero added sugars, only 100 calories, 25 grams of carbohydrates and 6 grams of fiber. The french fries have over 400 more calories and over twice the carbohydrates.The pear also has a low glycemic index so its not going to spike blood sugar despite the natural sugar inside it. The pear also has properties within the nutrients that fight inflammation, aid in weight loss, boost heart and microbiome health. Most pears in the United States are produced in California,Oregon and Washington. The french fries are energy dense because they have a disproportionately high amount of calories per gram, whereas the pear contains more grams per serving yet has fewer calories. If you’re overweight it may be wise to consume more nutrient dense foods, opposed to energy dense foods. The energy surplus found in foods like french fries will cause an accumulation of visceral body fat. In order to lose weight, one must go into a calorie deficit. One can become fully satiated by eating a higher volume of nutrient dense foods which will still have lower calories.